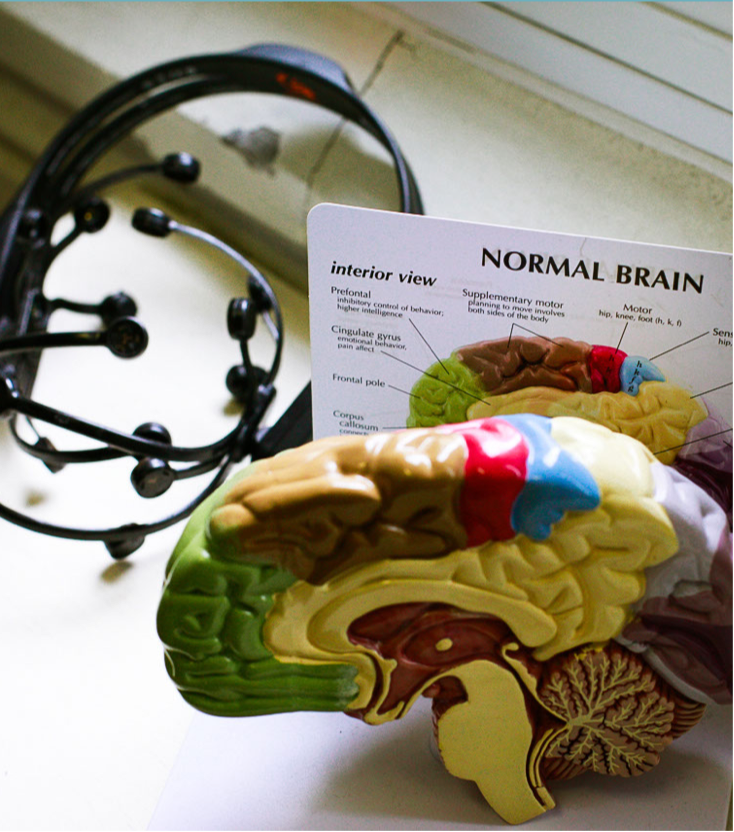 The Study Academy, inspired and influenced by the field of Mind, Brain, and Education participates actively in educational research. As a school designed with scale and nimbleness in mind, we are able to identify key areas for research and actively translate empirical findings into the classroom. The overarching principle behind our research is to create virtuous cycles of learning — wherein teaching practice and classroom structure generate testable hypotheses and research outcomes are translated into teaching and learning strategies.

In particular, we have several “big picture” questions that guide our research:

How can adaptive “21st-century” skills be fostered and developed in the classroom?

How can the principles of Universal Design for Learning be implemented into our “social experience” philosophy of classroom learning?

How can teachers empower students to grow greater self-awareness and self-efficacy?

What methods and analytic processes can be used to provide a richer understanding of student growth and development?

In pursuit of empirical solutions to these problems, The Study Academy will have continuous research projects and programs running. Consistent with our belief that manuscript publication is one of the more effective channels of connection with basic researchers, The Study Academy will target conference presentations and manuscript publications as deliverables for each of the in-situ and theoretical research activities completed at the school. 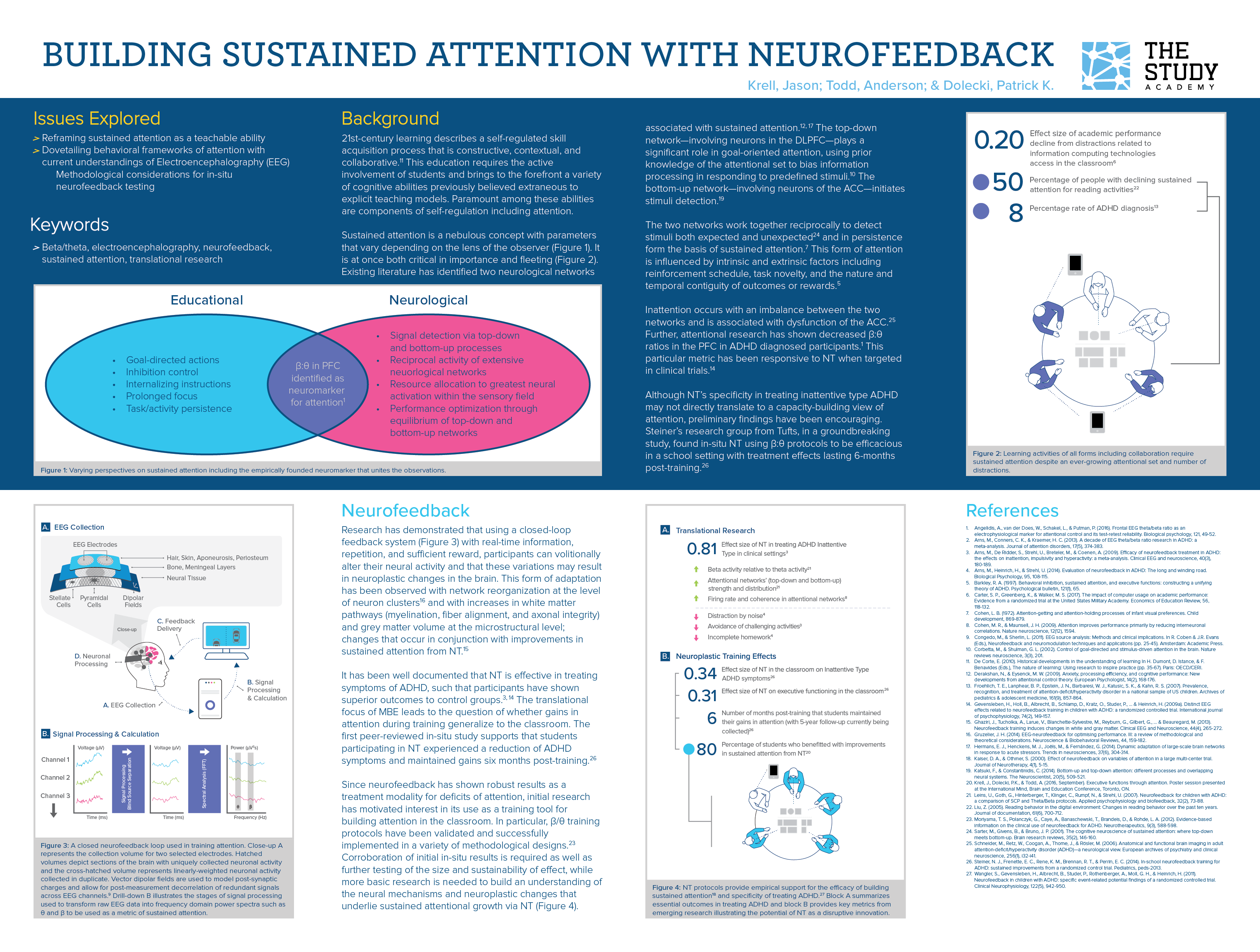 The objectives of this poster are to reframe sustained attention as a teachable ability and to dovetail behavioral frameworks of attention with current understandings of Electroencephalography (EEG), such that educational research practitioners may use this information to inform methodological decisions for in-situ neurofeedback testing.

Sustained attention is a nebulous concept with parameters that vary significantly depending on the lens of the observer. Given the quality and quantity of self-regulation required in building the adaptive competences associated with the 21st-century classroom, education has an intrinsic need to develop fundamental components of self-regulation including sustained attention. Existing literature has identified two neurological networks (top-down and bottom-up) associated with sustained attention (Derakshan & Eysenck, 2009; Hermans, Henckens, Joëls, & Fernández, 2014). The top-down network—involving neurons in the dorsolateral prefrontal cortex (DLPFC)—plays a significant role in goal-oriented attention, using prior knowledge of the attentional set to bias information processing in responding to predefined stimuli (Corbetta & Shulman, 2002). The bottom-up network—involving neurons of the anterior cingulate cortex (ACC)—initiates stimuli detection (Katsuki & Constantinidis, 2014).

The two networks work together in a reciprocal manner “characterized by the subject’s readiness to detect rarely and unpredictably occurring signals over prolonged periods of time” (Sarter, Givens, & Bruno, 2001). In addition to signal detection, sustained attention also describes a process requiring persistence (Cohen, 1972) which is influenced by intrinsic and extrinsic factors including reinforcement schedule, task novelty, and the nature and temporal contiguity of outcomes or rewards (Barkley, 1997).

Inattention has implicated an imbalance between the two putative networks and is associated with dysfunction of the ACC (Schneider, Retz, Coogan, Thome, & Rösler, 2006). Further, attentional research has shown decreased beta/theta ratios in the prefrontal cortex region of the brain in ADHD diagnosed participants (Arns, Conners, & Kraemer, 2013). This particular metric has shown responsiveness to neurofeedback training (NT) when targeted in clinical trials (Gevensleben et al., 2009). These trials also showed specificity of treatment of ADHD, and particularly inattentive type.

Although NT’s specificity in treating inattentive type ADHD may not directly translate to a capacity-building view of attention, preliminary findings have been encouraging. Steiner’s research group from Tufts, in a groundbreaking study, found in-situ NT using beta-theta protocols to be efficacious in a school setting with treatment effects lasting 6-months post-training (Steiner, Frenette, Rene, Brennan, & Perrin, 2014).

Attention is increasingly valuable and scarce as we transition into 21st-century classrooms. A greater need to reverse the trend of diminishing attention due to increases in ADHD prevalence and emergent culturally-induced ADD has emerged. NT has shown promise as a capacity-building tool for sustained attention in the classroom and educational researchers need to build in-situ testing protocols to assess the efficacy of this technology.

Comment on the Practical Significance and Implications of the Findings

This research is designed to encourage applied, in-situ testing of existing basic and applied neurological findings. The intentions of the authors are to understand the efficacy of building sustained attention through NT in classroom settings and to further explore the translational effects on learning skills and work habits in the classroom. 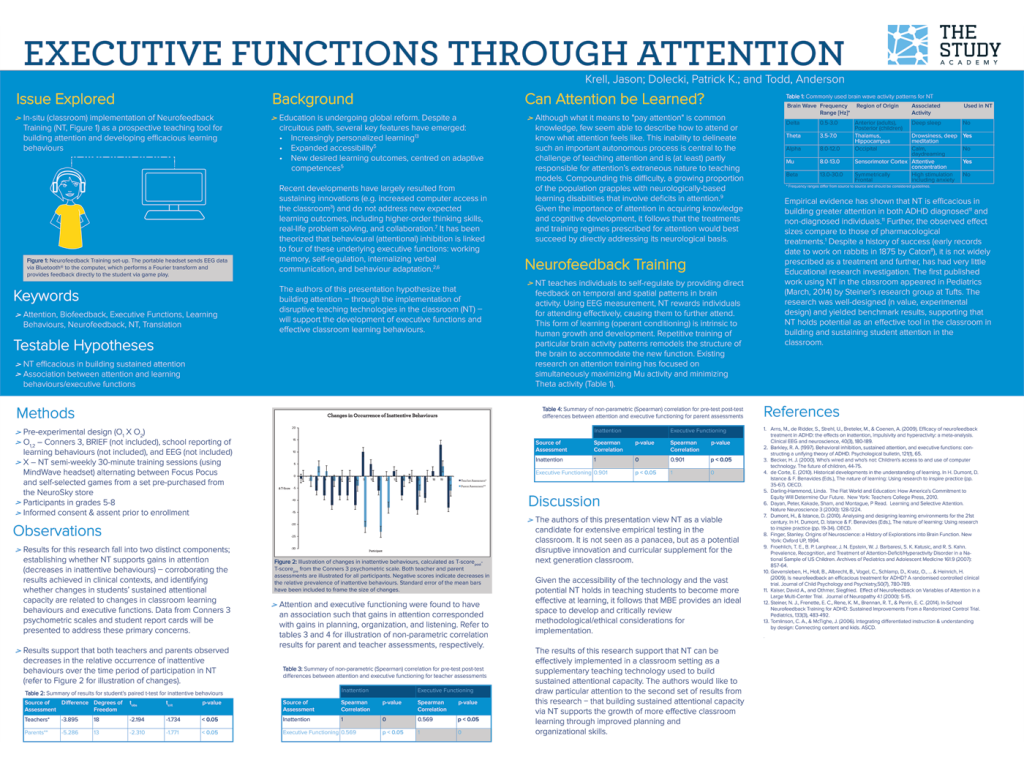 Neurofeedback Training (NT) has a track record of efficacious treatment of ADHD symptoms. With the exception of recent research by the Tufts group, empirical (basic) studies have focussed on determining the effect size of NT in comparison to pharmacological solutions and other relevant psychotechnologies. Given that attention is a requisite capacity for learning, the authors of this abstract are interested in investigating NT in applied (classroom) settings to build an understanding of the relationship between changes in directed, sustained attention (as generated by participation in a classroom NT protocol) and learning behaviours and work habits. Specifically, it is hypothesized that NT can be used in a classroom to build greater capacity for sustained, directed attention and that these changes in attention will yield improvements in scholastic efficacy, namely in areas of learning skills and work habits.

The implications of this research are severalfold; further in-situ research investigating NT as a capacity building tool is required, repeatability with larger and varied samples requires testing, and NT holds potential as a translation tool between basic research and classroom teaching practice. 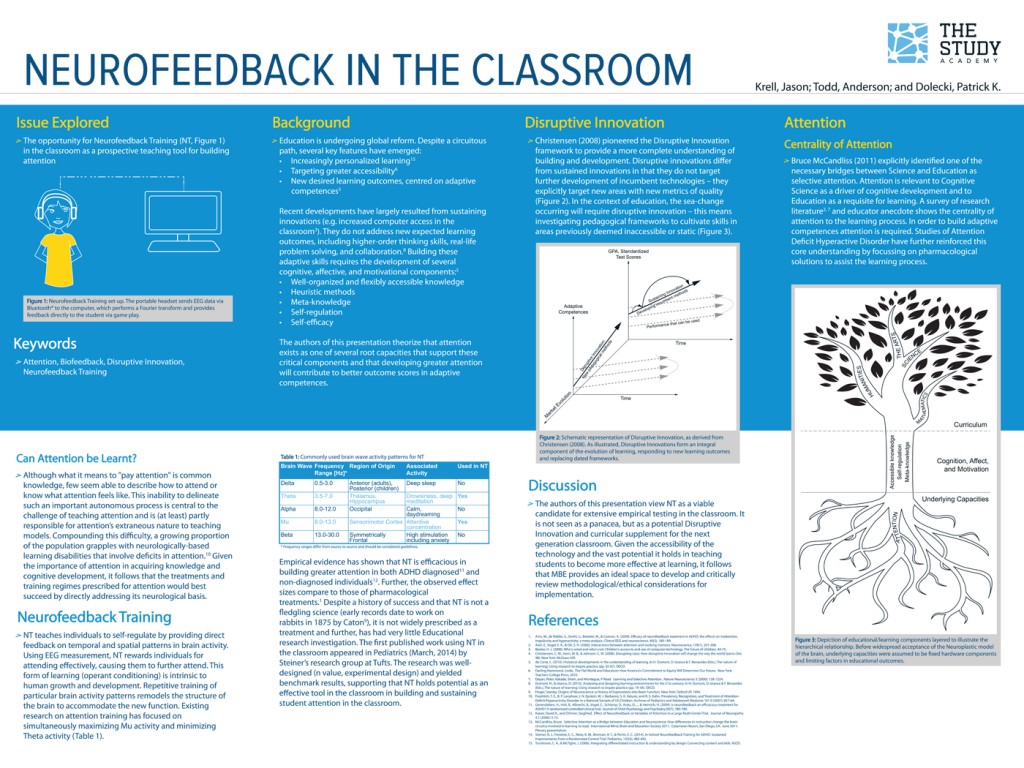 Neurofeedback Training in the Classroom

The importance of selective attention as a requisite condition for cognitive development has been well established through empirical evidence and philosophical argument, and is further supported through personal observation. Basic research on attention training has effectively identified the neuronal activity associated with attention, as well as the training effect size (comparable to pharmacological treatments), and has provided external validity through testing a wide variety of populations. What is missing from the literature (and our primary interest) is the applied research – establishing links between changes in attention and work habits, and cognitive development. This presentation (IMBES, 2014) was centred on encouraging the research community to implement more testing of NT in the classroom and to invite criticism of existing methods. 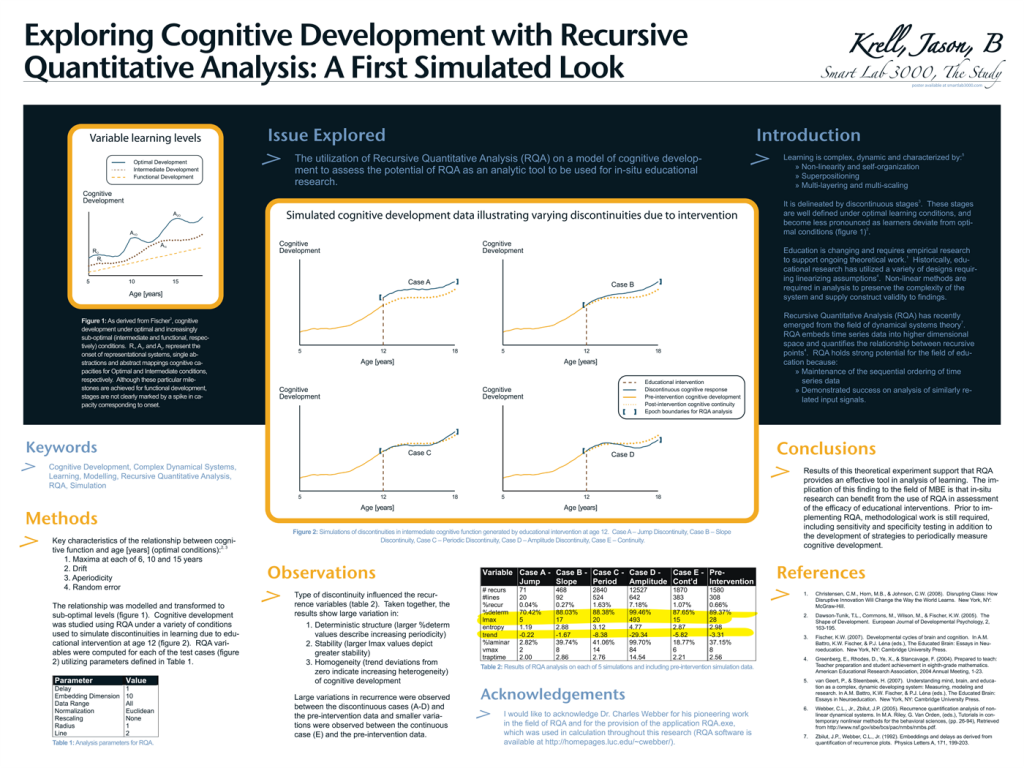 Cognitive development is a non-linear process, described as a punctuated equilibrium (ebbs and flows), with each stage of progress representing a milestone in complexity of development. These stages have been described, understood, and modelled (Dynamic Skill Theory) by the Harvard Graduate School of Education research group (lead by Dr. Kurt Fischer), and strongly indicate the need for academic metrics beyond GPA. In this theoretical experiment, an individual’s cognitive development curve was mathematically modelled and analyzed using a novel technique (Recursive Quantitative Analysis [RQA]), commonly implemented with complex, dynamical systems in the health sciences (e.g. EMG, EEG). The purpose of the investigation was to determine whether RQA exhibited sufficient sensitivity to differentiate between different types of changes in trajectory to the development curve that may have resulted from an intervention. Results revealed that RQA was able to differentiate between pre and post conditions, supporting that it move to empirical testing.

Virtuous Cycles of Learning: Redesigning Testing During the Digital Revolution

The Nature of Learning: Using Research to Inspire Practice

We Feel, Therefore We Learn: The Relevance of Affective and Social Neuroscience to Education

Thank you for supporting the research initiatives of The Study Academy.